Everything in life has a ‘Yin & Yang’ to it, at least that’s what appears to be the case. 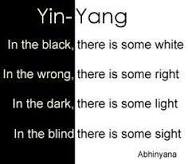 Religion for example, if you look at those who preach it, every now and then you will find an individual who preaches a religion in a pure and honest way, Mahatma Gandhi, or Martin Luther King spring to mind.

Unfortunately these people are few and far between which unbalances the ‘Yin & Yang’ theory, for that theory to work you need a reasonably equal balance between the two.

Most so called religious people I have encountered in my life use religion to their own ends. You know the type I mean, those who try to justify their actions by saying “I am a Christian” or “I often consult my religion before commenting or acting on something”.

These sort of hypocrites use such phrases to protect their own corrupt and inept behaviour, Hence my reason  for choosing Atheism, an atheist can not possibly be a hypocrite, he knows he is not perfect, he knows his flaws, this does not make him a bad person, quite the contrary, it makes him honest and honest enough not to use a RELIGION to justify his wrongs. Think about it…..

In recent years I have had to encounter at close range, politicians, believe you me its not a pretty sight.

For those of you who have read this blog you will be aware that for this past year I have commented extensively on those individuals behind the now defunct troll blog ‘Thoughts of Oscar’.

All of what I have said is true and can be supported especially when it comes to the main antagonist behind that blog, ‘MP for Clwyd West, David Ian Jones’.

To get my point across I have very much regurgitated much of what I have previously blogged about, not necessarily the best way to go about things but it created enough attention from the people responsible for the troll blog in question, to the point that they choose to use their extended partners in crime, within the ranks of North Wales Police, to silence me.

Some may think that a bit far fetched but it is completely true and can be proved and as I have said before that despite the attempts made be the individuals concerned to silence me by arresting me last year on four separate occasions, raiding my home, arresting my wife, taking our disabled child’s toys and reliving us of our passports and personal documentation, I am still here and still fighting.

But we know all this and as our solicitors are dealing with the unlawful actions of North Wales Police, I will not dwell on these points at this time.

Now Jones believes he is an upstanding honest politician, he quite often quotes his being a Christian to justify some of the awful things he has said and done,

Take the time he publicly accused same sex couples of being unable to provide a safe and happy environment for the raising of children.

Why would he say that? he is quite obviously homophobic, He states he consulted his Christian beliefs before making that awful statement.

Then there was the time he accused a disabled ex service man of being a liar and a labour activist when the man in question confronted Jones on the terrible effects that the bedroom tax was having on people like him, a tax which Jones whole heartedly supports and a tax which many of us know has created a greater divide between those that have and those that do not.

Then there’s the time he used his troll blog ‘Thoughts of Oscar’ (under the guise of anonymity) to declare that his colleague. Guto Bebb, had taken a bribe off a Jewish business man, this was completely untrue but Jones used that statement to try an embarrass Bebb Publicly and de stable Bebbs Aberconwy seat before the elections of last May.

Jones is quite obviously one of these out of touch politicians that would like to see disability allowances scrapped.

Jones makes a big deal of his Christianity yet behaves like the Devil.

Last year despite Jones attempts to affect Guto Bebbs chances of re election by publishing that untrue accusation about Bebb on his blog, he went on to accuse me of affecting his chances of re election, because I had published the truth about his lies, he had me arrested and detained under the representation of peoples act 1983.

This again was another of Jones lies but clearly demonstrates the influence he has with certain high ranking police officers.

The list of Jones lies and dark doings goes on and on, all of which I have previously publishes on this blog.

By far Jones most despicable crime is the fact that despite undeniable evidence he still denies being the main author to the troll blog ‘Thoughts of Oscar, a blog that created so much harm and upset to so many, one poor chap even committed suicide because of the vile things Jones allowed to be published on that blog.

Jones has been afforded protection, protection provided by those corrupt high ranking Officers in North Wales Police and his influential connections within the Freemasons.

Why has Jones relied on his corrupt connections to try and silence me? all of which has come to nothing because everything I have said is true, why has he not bothered to issue civil proceedings against me?

The answer is simple Jones is a corrupt foolish liar, if he did try the civil route, which he will not, he would have to defend his claims against me publically, which he would loose and all of which would result in a high profile case where he would have to answer some very pertinent questions,

Jones has successfully as yet, sought to keep this out of the press, one has to ask why the local press have not published about the four occasions last year I was arrested and the accusations Jones made against me, surly this is all in the public interest, Jones does not want all that has happened published and as yet the North Wales Weekly News and the Daily Post have adhered to his wishes, why? if he is so innocent why?

I have nothing to hide, I am happy to provide evidence to support everything I have said and done.

Jones is a liar and is afraid of the truth, that much is obvious.

As we are only to aware Jones is not the only politician to embrace the dark side and be protected for it, there have been so many:

Jones behaviour tells me he is not just hiding his involvement in the troll blog ‘Thoughts of Oscar’, but he is hiding something much more devious…..the truth will out eventually.

3 thoughts on “Welcome to the ‘Dark Side’”