What became of the Trojans?

A lesson from History for wanna be Trojans.

According to classical sources, the war began after the abduction (or elopement) of Queen Helen of Sparta by the Trojan prince Paris. Helen’s jilted husband Menelaus convinced his brother Agamemnon, king of Mycenae, to lead an expedition to retrieve her. Agamemnon was joined by the Greek heroes Achilles, Odysseus, Nestor and Ajax, and accompanied by a fleet of more than a thousand ships from throughout the Hellenic world. They crossed the Aegean Sea to Asia Minor to lay siege to Troy and demand Helen’s return by Priam, the Trojan king.

The siege, punctuated by battles and skirmishes including the storied deaths of the Trojan prince Hector and the nearly-invincible Achilles, lasted more than 10 years until the morning the Greek armies retreated from their camp, leaving a large wooden horse outside the gates of Troy. After much debate (and unheeded warnings by Priam’s daughter Cassandra), the Trojans pulled the mysterious gift into the city. When night fell, the horse opened up and a group of Greek warriors, led by Odysseus, climbed out and sacked the Troy from within.

The Trojan horse, built by the Greeks. 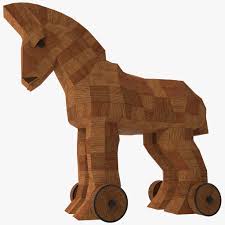 A modern day Trojan is nothing less than a destructive virus, a computer worm, created by internet cowards to cause destruction.

A trojan is little more than an internet troll.